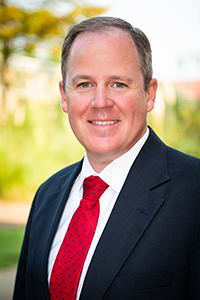 Scott Thompson joined the Alumni Association in June 2003 as Alumni Assistant, working with the Ole Miss Alumni Clubs nationwide and the Young Alumni Council. In 2008, he was promoted to Assistant Director and given the responsibilities of coordinating the alumni activities for the Schools of Law and Pharmacy as well as working with the Herb Dewees Alumni Association Scholarship program, and various constituency group reunions. In 2018, Scott was promoted to Associate Director of Engagement. In this role he manages the association’s work with the university’s schools, the alumni club program and various reunion events.

After earning a B.A. in English from Ole Miss in 1997, Scott went to work on his M.A. in Journalism, which he completed in 2008. He is currently pursuing a Ph.D. in Higher Education. Scott is past president of the Rotary Club of Oxford-Ole Miss and currently serves on the club’s board of directors. Scott is president of the board of directors of 21 United, an organization designed to promote awareness, inclusion and acceptance of individuals with Down syndrome. In 2014 he helped organize Oxford’s first Buddy Walk, a community event that raises money for 21 United initiatives and for a summer camp for Down syndrome families. Scott has also been appointed to serve on the university’s Childcare Initiative Advisory Committee, a group that is studying ways Ole Miss can become a leader in early childhood education and possibly early intervention.

Originally from Booneville, Scott has resided in Oxford since 1994. He is married to the former Mary Sloan (MEd 08) of Oxford. Scott and Mary have two children, Lucy and Samuel.