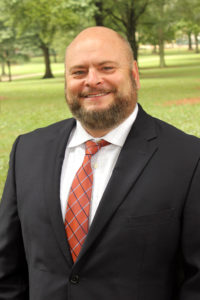 Prior to being named associate director in March 2011, he served as systems analyst and later as assistant director for information services. He holds a bachelors degree in Management Information Systems (2001) from Ole Miss.

Prior to his graduation in management information systems, he was a logistics manager in the Mississippi Army National Guard. A native of Winona, Rusty is married to Laura Allison Woods and has five children: Lee, Alyson, Josh, Peyton and Cooper and two grandchildren. He enjoys spending his free time with his family and friends.