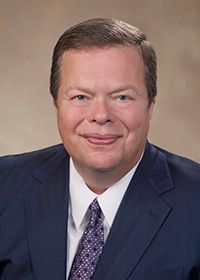 Dick Molpus is founder and president of Molpus Woodlands Group, a timberland investment management organization headquartered in Jackson. Molpus has had a long career in public service and business. In 1980 he became Executive Director of the Governor’s Office of Federal-State Programs under Mississippi Governor William F. Winter’s and worked as part of Winter’s team to pass the historic Mississippi Education Reform Act of 1982.

In 1983 Molpus was elected Secretary of State of Mississippi, spearheading improved Mississippi election laws and strengthening public disclosure laws for lobbyists and forcing renegotiations of 10,000 below-market 16th Section Land leases. In 1995 Mr. Molpus ran unsuccessfully as the Democratic nominee for governor of Mississippi.

After his third term as Secretary of State, Molpus began Molpus Woodlands Group, which manages more than 1,500,000 acres of timberland across seventeen states. Dick Molpus and his wife, Sally, founded Parents for Public Schools, which has spread to seventeen chapters across 12 states. He co-chaired the 2006 Jackson Public School Bond Campaign, bringing $150 million for new schools and renovations.

Molpus received the H. Council Trenholm Memorial Award from the National Education Association; was inducted into the Mississippi Business Hall of Fame in 2005; and was honored in 2008 as a Champion of Justice by the Mississippi Center of Justice. In 2007 he organized and founded the United States Endowment for Forestry and Communities, a $200 million endowment to improve forest health and assist timber-reliant communities, and he is a founding board member of the National Alliance of Forest Landowners.