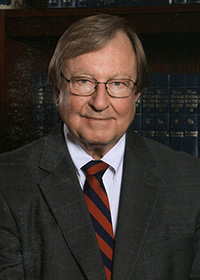 David W. Houston III served as the United States Bankruptcy Judge for the Northern District of Mississippi from 1983-2013. Prior to assuming the bench, he was a partner for 11 years in the Aberdeen law firm of Houston, Chamberlain and Houston. He also served as a special agent with the Federal Bureau of Investigation in Washington, Tampa, Fla. and New York.
Judge Houston served two terms on the Board of Directors of the American Bankruptcy Institute and chaired its legislative committee for 11 years. From 1995-2003, he was the Judicial Chair of the American Bankruptcy Institute’s Southeast Bankruptcy Workshop.

In 2011, Houston was the recipient of the Mississippi State Bar Association Judicial Excellence Award.  He was selected a Fellow of both the Mississippi Bar Foundation and the American College of Bankruptcy.  In 2003, he received the Bierce Distinguished Service Award.

Judge Houston retired from the federal bench in 2013 and joined the law firm of Mitchell, McNutt & Sams in its Tupelo office.