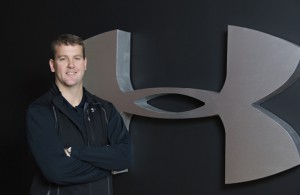 by Tom Speed
It was a chance meeting through a mutual friend many years ago that led to Walker Jones’ (BBA 98) current position as marketing manager for a major national firm.
Jones, a linebacker for the Rebs from ‘96-’99 met a young entrepreneur named Kevin Plank through his teammate Jon Desler (97). Plank and Dessler were childhood friends and Plank was visiting Oxford one weekend. He had with him some prototype athletic gear and asked the young athletes to test it out for him. Jones and Dessler wore the performance fabric shirts underneath their pads on game days in Vaught-Hemingway. Years later, that line of athletic gear would become world-renown as Under Armour. Today, Jones is Director of Sports Marketing for the corporation.
But it was a circuitous path. Jones had returned home to Jackson after graduation. After two years of working as a financial analyst, he found that he longed to be back in football. He’d been a four-year starter and a team captain for the Rebels. He had stayed involved doing color commentary for some Ole Miss pay-per-view broadcasts. But it wasn’t enough.
“I kept realizing that that was where my passion was,” Jones said, “being around athletes and collegiate athletics. I wanted to give back to Ole Miss, which had given me so much when I was there.”
So he wrote Coach David Cutcliffe and pleaded for a job, any job, on the football team. He said he would be happy to start at the bottom. He got the job, and it was indeed at the bottom. He was named as an administrative graduate assistant for the 2001 season. “I was only making about $500 a month but it was probably as valuable as any experience I’ve had,” Jones said.
The next year, he moved up a notch, then another and another until finally he was named Assistant Athletic Director for Internal Affairs. He served in that role until 2008. He moved over to TeleSouth, the company that owns the multimedia marketing rights for Ole Miss sports, to become their Vice President and Executive Director of Sports Marketing.
Then he got the call from Plank, the founder and CEO of Under Armour Inc. Throughout the years, they had stayed in touch.
“We would run into each other at conventions and trade shows,” said Jones. “We stayed in contact and helped each other out professionally.”
In March of 2008, he took the job as director of sports marketing at the company’s headquarters in Baltimore. Jones uses much of his experience gained at Ole Miss in his job today, and he draws many comparisons between Ole Miss and Under Armour.
As an athletic administrator in the big money, super competitive SEC, Jones was accustomed to competing with schools with much larger budgets. He says the same is true in the apparel business, comparing established, global giants like Nike and Reebok to large enrollment, big-budget schools like Alabama and Florida in the SEC.
“It just forces you to be creative,” Jones said. “When it comes to resources and budgets, you have to think differently. We don’t have as much money as our competitors. We have to make one dollar spend like three. We are a young company so it’s in our DNA to try to do things differently. There is no set way to do anything.”
Working his way up the ranks has allowed him to see the big picture, too. “It really helped me to develop and learn the business of college athletics at each level,” he said.
There’s no such thing as a typical day for Jones now either. He oversees all of the company’s high school and college partnerships. So he might spend his days attending a high school practice one day, getting feedback from tomorrow’s superstars to take back to his product team. The next day, he might be visiting with a college athletic director talking about a new line of apparel.
Though he relishes the challenges presented by his new position, Jones says the two and a half years since he left Oxford have made him appreciate Ole Miss even more.
“I owe a lot to Ole Miss and cherish my years there,” he said. “When you spend time away you realize what a great place it is and how much you owe the university. I take a lot of pride in playing at Ole Miss and going to school there.”