Many people might view their mid-50s as a time to look forward to retirement, spending time with grandchildren and traveling. It’s the time to relax, and enjoy the simple things in life. That typically does not involve playing in the Semi-professional Football League.

Alumnus Henry Roop (BA 80), left offensive guard for the Mississippi Maddogs in Jackson, entered retirement with his eye on achieving the dreams he had in college.

“There are some things in life you want to go back and do that you never had an opportunity to do,” said Roop. “I wanted to go back and relive those days of playing football.”

A native of Memphis, Roop graduated from Senatobia’s Magnolia Heights School in 1975 and promptly enrolled at Northwest Community College with an initial interest in becoming a doctor.

“I only had two desires in my life, and I knew what they were by the time I was 10,” said Roop. “I knew there were two things I could do where I would never have to work a day in my life and that was medicine or teaching and coaching.”

After spending two years at Northwest, Roop transferred to Ole Miss in the fall of 1977 as a walk-on for the Rebel football team under then Head Coach Steve Sloan.

“I always knew I wanted to go to Ole Miss,” said Roop. “I wish I could have gone right out of high school but due to the cost, I had to go to Northwest for the first two years. I wish I could’ve gone to school at Ole Miss for 36 years. I really had a great time there.”

Once at Ole Miss, Roop decided to switch his major from pre-med to microbiology amid a decline in his grades, which ultimately forced him to quit playing college football.

“During the time I walked on I was a pre-med major, and then my grades really dropped,” said Roop. “I knew I had to make the choice of playing football or receiving an education. I decided it would be in my best interest to not play football and continue on and finish out my degree in microbiology. I then completed an additional major in secondary education.”

Roop retired in 2012 and embarked on a challenging new career – playing semi-professional football with a group of 19-28 year-olds.

“I retired January 1, 2012, and decided to walk on and try to play semi-pro football,” said Roop. “I tried out and made the team with the Tupelo-based Mississippi Stallions, a member of the Gridiron Developmental Football League (GDFL).”

Roop stayed with the Mississippi Stallions for one year, even playing on the 2012 Mississippi All-Star team beating the Louisiana National All-Stars 14-9.

He joined the Mississippi Maddogs in 2013, which earned him a spot in both the AAA Super Bowl and the AAA Minor League Football Hall of Fame.

“After playing my first year with the Maddogs, I got inducted into the class of 2013 Minor League Football Hall of Fame,” said Roop. “That was probably the coolest thing I’ve ever done. I was incredibly honored and humbled. There were 25 people inducted in 2013, and I have no idea how I got selected.”

After his success in semi-professional football, Roop decided to give college football at Ole Miss another try.

Inspired by the story of Vince Papale in the movie, Invincible, who walked on to play for the Philadelphia Eagles in 1975 at the age of 30, Roop wanted to see if he still had what it takes.

“I wanted to see if I could do it,” said Roop. “That was my challenge.”

Roop soon learned he was not eligible to play college football for a Division 1 school, having used up his eligibility during his 10 consecutive semesters at Northwest Community College and Ole Miss.

Saddened but not defeated, Roop decided to continue playing with the Maddogs and earned a spot on the 2014 team.

While receiving hall of fame honors has been the pinnacle of his semi-pro football career, Roop plans to continue to play as long as he is physically able. The intensity of the game, coupled with the desire to win and be a leader among his younger teammates, keeps him going.

“I see playing football for as long as I can,” said Roop. “I have no idea how long that may be. The worst part at my age is recovery. I stay sore a little bit longer.” 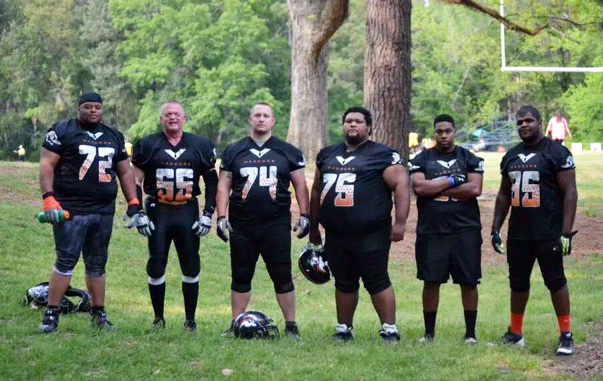 Henry Roop is a Member of the Ole Miss Alumni Association.

Henry, Ole Miss thanks you.